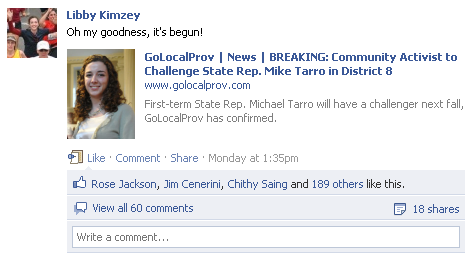 (the GoLocalProv piece that started it)

Community activist Libby Kimzey will challenge Tarro for the District 8 seat that used to belong to House Finance chairman Steven Costantino. The district in its current form spans Federal Hill, Olneyville and the Valley neighborhood.
Tarro has come under fire recently because of his handling of the Grove Street School property that was scheduled to be torn down today. The property is owned by the Tarro family, which hoped to convert part of the land into a parking lot. Tarro was let go from his position as assistant city solicitor over the situation earlier this year.
According to a fundraising e-mail sent out today, Kimzey considers herself a progressive Democrat.
"In the spring of 2006 I walked to the State House to lobby for voter-owned elections. The five and a half years since have been a blur of organizing, recruiting, managing and working with broad coalitions to build a better world for all of us in Rhode Island," she writes. "The specific issues have varied, from energy-efficient homes, to fair and progressive taxes, to access to capital for Providence entrepreneurs. And, for a stretch in there, it was all about getting a very special woman Teresa Tanzi elected to represent her district in South County. Each of these paid and unpaid positions I've held have prepared me to take the next step: to bring accessible, community-centered leadership to my home district in Providence's Federal Hill, Olneyville and Valley neighborhoods."